In some countries, 40% of children aren’t prepared for primary schooling. With minimal household income, thousands of families cannot provide their children with school supplies, making it impossible for children to enroll in education.

The Dominican Republic is one of those countries – a place where education is not accessible to children who cannot afford necessary school supplies. It’s also a place where Worldline’s parent company, Fibernetics, has its contact centre filled with amazing people like Peter Cross.

“I love kids. I have lived down here for 10 years, but it still pains me to see the poverty around me on an everyday basis. Kids with clothes falling off their backs or no shoes on their feet… Kids who are 7 or 8 years old forced to work in the streets either shining shoes or begging for money.” This is what fueled Peter, our VP at Fibernetics’ Contact Centre, to assist Fibernetics with these children in need.

Our fundraiser in the Dominican Republic, Backpacks For Kids, was developed to provide necessary school supplies for children who are not able to enroll in education due to poverty. This year, Fibernetics supplied 127 backpacks packed with school supplies. Peter Cross has attended all of these events, “This is our fourth annual Backpacks For Kids event and is the largest we have done to date.”

It started off at Peter’s house; where volunteers helped cook 250 hotdogs and supplied refreshing drinks for after the event was over. Due to extreme heat, the event started at 4:30p.m. However, parents and their children started arriving as early as 1:00p.m. Luckily, we had provided gazebos so attendees could relax in the shade until the start time.

Each backpack contained notebooks, pencils, erasers, glue, rulers, etc. For younger kids, they would include materials like crayons and pencil crayons, too. Since we have a limited supply of backpacks, we distributed tickets to children in various different neighbourhoods and collected their names during the weeks leading up to the event. This way we could prepare and plan the amount of backpacks we’ll need.

Children also received a gift certificate for $1000 peso, which can be used toward buying their school uniform. This amount of money is enough to buy a pair of pants, a dress shirt and socks. It was just like an awards ceremony; the child was called up, they received their backpack and gift certificate, and the crowd applauded as they were given a new chance with education. With this gift, they are able to attend school.

As the day came to a close, there were four children left who had been patiently waiting for their names to be called. They did not have tickets, but had heard about the event and attended with hopes that Fibernetics could help. Fortunately, we had extra supplies to provide each of them with their own backpack and a gift certificate. They were ecstatic.

This day was filled with hope, excitement and love – feelings you don’t always experience all in the same place. We are so grateful to have the ability to help these amazing children and cannot wait for next years’ Backpack For Kids event! 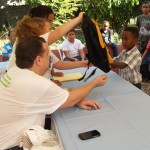 Have you received a call from the Worldline or FIbernetics phone number, stating you owe personal identification or money to the CRA? Please be advised that 1) it’s not from us or any entity we are associated with – and it’s nothing you should be taking action on.

The CRA has seen a rise in telephone scams as of June 2015. The scammers have been using our Worldline number via computer to call our customers in an attempt to phish them into sending money in a fraudulent scam. They’ll often use forceful language and tone, and ask for very personal information that the CRA doesn’t require.

Be aware of the CRA’s verified phone number and refer to it when receiving suspicious phone calls. We are conscious of this issue and are dedicated to educating our customers on this unfortunate circumstance. Please spread the word!

If you do receive a call from a number that is registered to Worldline, or our parent company, Fibernetics, please report it on our Nuisance Call Reporting page.

Beyond this CRA scam, the CRTC is going to work to improve their policy when it comes to nuisance calls:

From the Globe & Mail: Nearly seven years after the launch of the National Do Not Call List, Canada’s federal telecommunications regulator has made a public call for ideas to combat so-called caller ID “spoofing,” a technical trick that facilitates many of the unwanted calls still bombarding households.

The Canadian Radio-television and Telecommunications Commission began a public consultation on Tuesday, looking for “new and innovative solutions” to block unsolicited telemarketing calls and scams. In particular, the CRTC is hunting for answers to systems that use caller ID spoofing and display false telephone numbers, in some cases appropriating legitimate numbers that belong to businesses or households. Spoofing circumvents the Do Not Call List and helps offending callers avoid being punished with fines.

Since the Do Not Call List was launched in the fall of 2008, 12.8 million phone numbers have been added. Canadians have lodged 900,000 complaints of alleged breaches of the rules since then, an estimated 40 per cent of which involved spoofing.

Scams and illegal telemarketing remain a major source of frustration to telephone customers across the country. The CRTC has levied more than $6.2-million in fines and issued more than 190 warning letters.

But it has also conducted more than 1,500 investigations and it noted that it is hard work catching offenders. In March, the CRTC revealed it had fined nine Greater Toronto Area companies telemarketing duct cleaning and home services a total of $149,000, but it said the investigation was “lengthy and labour-intensive.”

“Canadians are very frustrated with telemarketers who hide their identity or misappropriate the legitimate numbers of Canadians and businesses,” Jean-Pierre Blais, the CRTC’s chairman, said in a statement.

“Following this consultation, we will be publishing guidance material to empower Canadians to make informed choices for themselves and their families.”

The CRTC is asking the telecommunications industry to provide a summary of current options and features to block such calls by Sept. 4. The public consultation is open to comments until Oct. 16.

We loved being a part of the KidsAbility™ Super Hero Run. Worldline’s core values line up seamlessly KidsAbility™: a forward-thinking organization that strives to empower the youth of today. But what really made our day fun was testing some super kids’ super power abilities with games! Our Worldline Jelly Bean Grand Prize contest was filled with some sweet (pun-intended) prizes!

She was determined to guess the amount of Jelly Beans contained in this jar. She did it with the help of her skilled guesstimation superpowers – for trapped Jelly Beans all over the globe! And with that, she won our first place prize of one year of free Home Phone and DSL 6 Internet Bundle, a Chucke Cheese’s family pizza party, and of course, a jar of delicious candy! We’re thinking she’ll take over the world with her trusty sidekick – the Jelly Bean!

See her accepting her prize!

Thanks Olivia and her super parents, Mike and Jean, for being involved in this event! We would like to add that we are not responsible for the Hulk-like sugar transformation Olivia will be having in the near future!

This super kid was our second place Jelly Bean master. With her sweet-tooth expertise, she was just a Cat Woman whisker away from landing first place in our Jelly Bean Competition! But don’t worry, as Spiderman once said: with great power comes great free Internet (or something like that.) Mia won one year of free Home Phone and DSL 6 Internet Bundle, plus a family pass to the Kitchener Children’s Museum!

Thanks to Mia, and her super dad, Jeremy, for participating!

That’s right – our third place prize winner is Wanted! They won one year of free Home Phone and DSL 6 Internet Bundle and they have not claimed them. If you spot a kid who can guesstimate with their eyes closed and is Jelly Bean savvy, politely ask them to take a break from fighting crime and fly down to give us a visit!

We would also like to give super kids Amelia and Barry honourable mention for winning 4th and 5th place in our Jelly Bean Contest.

Thanks to all our heroes for taking time out of their busy saving-the-day schedule to enter our contest at the KidsAbility™ Super Hero Run. You’re all super kids to us! And to parents across the globe, this is where we figured out super kids’ kryptonite: Jelly Beans! Keep that in mind!

Heather Curran, Senior Development Manager for KidsAbility dropped by the Worldline offices to present a certificate of appreciation for our sponsorship of the Super Hero KidsAbility Run held this past father’s day.

Accepting the award was Brett Young, Worldline’s marketing intern, and the project manager for our participation. Brett did a great job planning and organizing the activities in the Family Fun Zone, plus a contest to give away free Worldline Unlimited Internet and Home Phone Bundles. He also organized the crew of company volunteers who staffed everything.

Pretty impressive for a 22-year-old kid. Kudos to him, but especially to KidsAbility who do such an amazing job in the local community. We all can’t wait until next year!